(Science, my boy, is made up of mistakes, but they are mistakes which it is useful to make, because they lead little by little to the truth.*)

We consider how animals extract a stable picture of the world from the blur of inputs obtained with their actively moving sensors. The underlying computational problem is to combine a reafferent signal of sensor position with an exafferent signal of touch so that the animals can probe objects, identify their location in a body-centered coordinate system, and plan future actions. We work with orofacial behaviors, with a focus on the vibrissa sensorimotor system of rats and mice; these animals palpate the world in front of them as they navigate and identify objects (top figure). 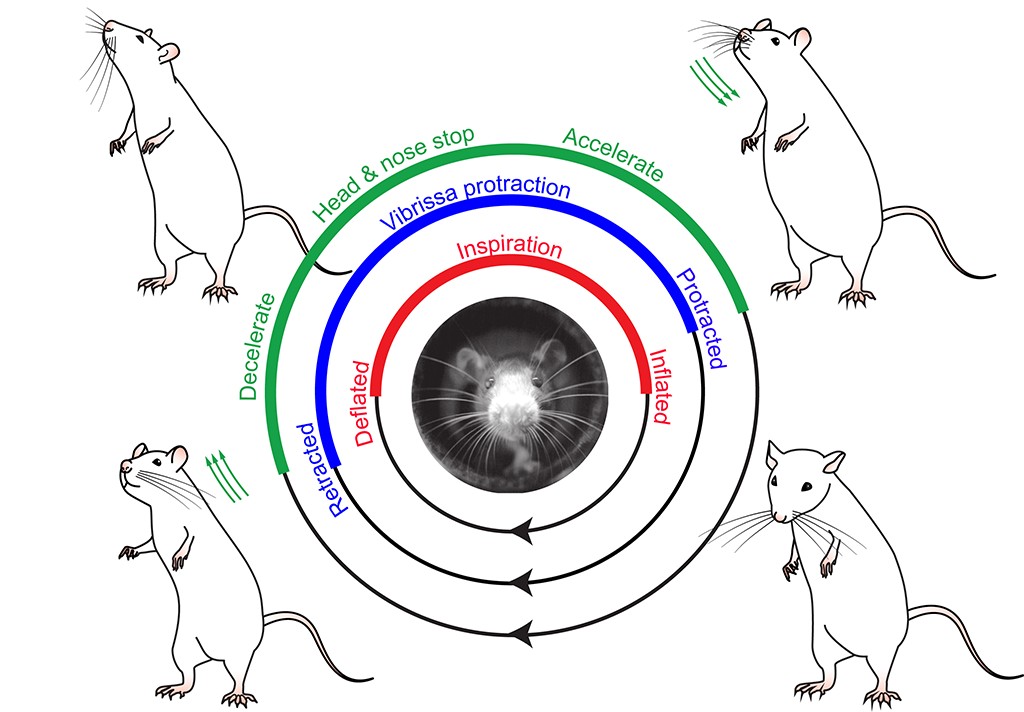 The anatomy of the vibrissa sensorimotor system consists of a hierarchy of nested loops that support coherent rhythmic electrical signaling (middle figure). Feedback within the brain stem loop modulates the motion of the vibrissa and gates sensory transmission. Loops at the thalamic and neocortical levels appear to control vibrissa motion based on sensory input. The integration of control signals from inputs at multiple levels in the hierarchy is mediated by motoneurons in the facial nucleus. This stands as a model for deciphering, in general, the algorithm that underlies motor control of sensory input. 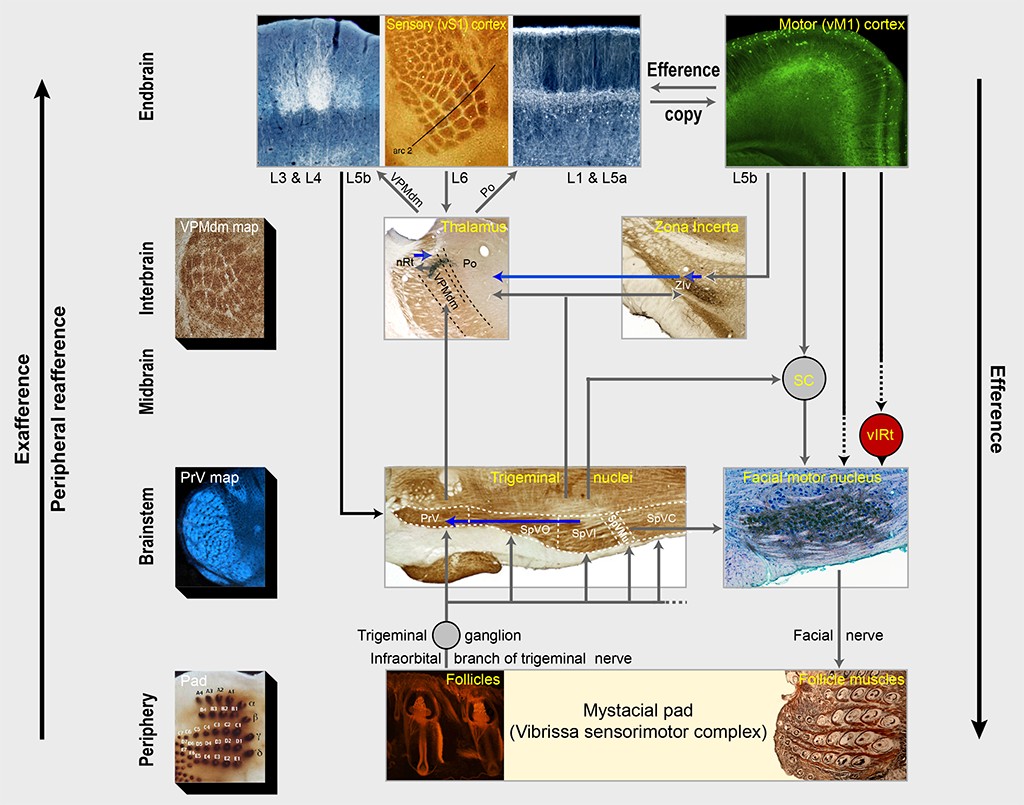 At the level of the brain stem, we identified the circuit responsible for generating the rhythmic pattern that drives the facial motoneurons and thus whisking (bottom figure). Interestingly, this structure receives input from the respiratory rhythm generator and, is fact, is reset by the onset of inspiration. In a second project, we identified a sensorimotor feedback pathway involved in active vibrissa contact. The results from behavioral, physiological, and anatomical experiments show that contact leads to a positive signal that further drives the mystacial musculature. Ultimately, the system adapts and feedback diminishes. In ongoing work, we seek the pathway that controls the midpoint, or posture, of the vibrissae.

At the level of the neocortex, we identified the nature and origin of reference signals for vibrissa position in both primary sensory and motor cortices. These signals are essential determinates of the position of the vibrissae. Interestingly, neurons in primary sensory cortex code position in coordinates that are referenced to the range of motion rather than to the body axis of the animal. These data, together with the results of behavioral studies to demonstrate that rats with only a single vibrissa can detect the angle of contact and physiology experiments that demonstrates that reafferent and exafferent signals share a common pathway, define a means to merge reference and touch signals to code vibrissa position. Indeed, our recent shows that this merge occurs in primary sensory cortex. Ongoing work suggest that a strong nonlinear input-output relation in neurons is responsible for the merge similar to homodyne detection in communication.